Editors Note: Sara blogged under ‘The Nonsuch Project’ on Victorian Flower Garden website after she moved to Nonsuch in Tasmania in early 2005, before she created the dedicated Nonsuch Kitchen Gardens website in mid-2009. These entries were referred to as The Old Diary.

I’m back! Oh, I have had such a long, long spell away from the garden with being so sick and I have absolutely hated it. The weeds grew, beds fell into disrepair or grew over into wild jungles, plants died through lack of attention and water … it was a horror.

But … I have to thank Tony Williams for coming in and getting so much done – weeding mostly which helped so much. I am very slowly getting back into the garden, piece by tiny piece. I am still having chemotherapy but managed major surgery about 4 weeks ago – that is the main thing keeping me back right now – there are major groups of muscles I can’t use and I just cannot do heavy work.

But still, I am doing some work.

Before I went into hospital I harvested a large crop of onions (my God! They survived a veritable jungle of weeds!), garlic (ditto) and shallots. My apple crop (very small) is currently netted off against the birds. I have had some carrots.

The major surprise, though, has been the front bog garden. I literally didn’t walk down there for some 5 months, but once Tony had been through weeding I discovered that not only was it still there but it was thriving. I have some blank spaces to fill in but I have a host of Russell Lupin seedlings growing now for just that purpose. Suddenly it is all coming together.

There are little pieces and bits I can do. Today I planted out half a lavender hedge, and I have autumn seedlings coming on – cabbage, leeks, beets, kohl rabi. I have decided that several paths will have lavender hedges bordering them, and one major bed I’d been using for veggies I will now not only border with lavenders, but have the central space as a herb garden.

I’m getting back there. Very slowly, but getting there.

I have been busy in the garden, as much as my convalescence allows (which is a fair bit now, thank heavens). The greenhouse is really being filled out with seedlings as well some winter pots. Most of the seedlings I had set at the start of February I have today planted out in their garden beds, keeping a few back spare in case the ones in the garden fail (or are picked apart by the rotten blackbirds), and I may plant them into pots … I’ll see. I have also got pots of peas and carrots going, as well pots of chives, oregano, parsley and spring onion, all in the greenhouse. I hope they do well there. I am hoping I can grow on brussel sprouts and cauliflowers in there, too.

I worry that I have left it too late for the winter crops, but at least they are going now. I think I will need to set a January alarm for winter seed setting for next year to make damn sure I get an early enough start. Yet I am much earlier than last year, from memory, when I am sure I left it until well into autumn.

I am really going to give greenhouse growing a go this winter – hopefully I can keep growing plants on in there into maturity.

Not only am I back but I am full of enthusiasm. My formal vegie beds are now all tilled and manured, and the largest of them is planted out with all the cabbages, kale, kohl rabi, beets and rocket. I have broccoli, spinach, leeks and cauliflower growing on as seedlings in the greenhouse and they can go out into a second bed in a few weeks once they are big and strong. The third bed is being reserved for my winter onion crop. There are peas and carrots planted in the greenhouse, as well a variety of herbs. Last week I had some perennial herbs delivered and they will go out into a new herb garden I will be planting up this spring – the three I got were a perennial basil bush (2), horseradish (2) and traditional sage (2).

But wait – there’s more! Who can work with just three formal vegie beds and a whole heap of spaces in the flower garden? No self-respecting girl gardener should have to put up with that. So I have ordered SEVEN more raised beds! I am so excited! They are made of that perennial Australian favourite – colorbond – so they will be nice and easy to assemble and put into their spots. best of all, they are going into areas that have previously been unproductive because of poor soil that I haven’t been able to build up – so I am really, really pleased and looking forward immensely to their arrival.

In the meantime I have been busily planning out the spring and summer garden – no time is too early. I drew up a pretty chart of the Kitchen Gardens … in real life it doesn’t look as neat as this, but once I get fully into my winter clearance it will be perfect.

Definitely time for an update! I have been working very hard – hampered not a little by a gradual and then worsening onset of arthritic like aches and pains. I am not sure if these are a long term side effect of chemotherapy or, indeed, some form of arthritis, but I will check with my specialist when next I see her.

I am making inroads into the garden … at last. I have all the raised beds installed and bolted up and I have been around much of the garden (still a little way to go) pruning back heavily (and uprooting a few roses which simply must go) and then dumping these prunings into the base of the metre high raised beds. A week or so ago I ordered in 4 cubic metres of compost/soil and I have filled two and a half beds … this is slow work due to not only the aches and pains but because of heavy rain recently (I am not complaining about the rain!). It has been a mild and wet winter thus far … I do hope for some frost for those plants which need it. I will try for some piccies once it is all done.

My winter veggies are doing well. I have in all my seed potatoes (sitting in the scullery waiting to shoot) and seeds for spring planting this year. I am full of enthusiasm and just waiting for the days to lengthen a little bit more and to warm slightly – but still much more winter to go.

Here are just a few photographs from the recent gardening activity.

1. A winter stable I built for the kitties! They love curling up in the pea straw and strangely it never sticks to their coats. Every year I try to layer down lots into at least one of their enclosures for them. 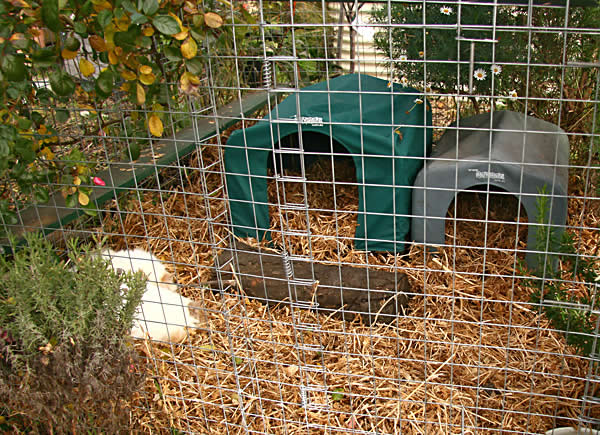 2. Some of the winter veggies – cabbage, kale, beets … 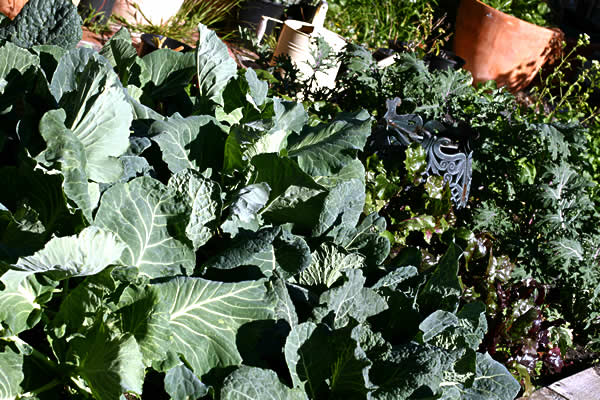 3. A nice autumnal atmospheric shot of the front steps and the leaves of a silver birth tree. 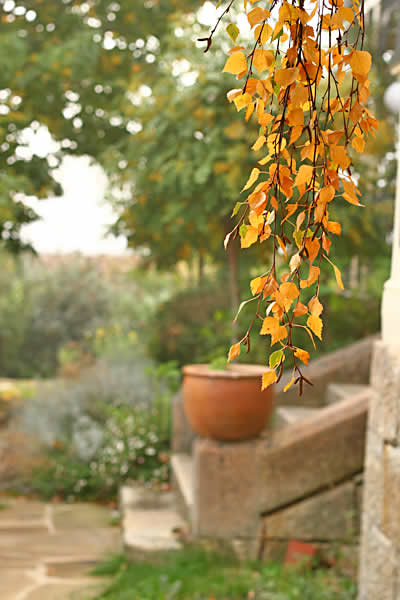 4. A rascally stray pumpkin that grew through a trellis and then expanded … it was butchered and eaten first among all pumpkins. 😉 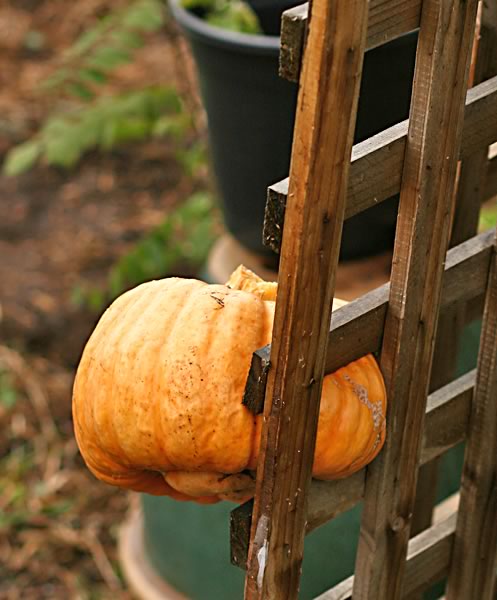 5. Two of the seven new raised beds – shown here when they were first being installed and not yet fully bolted up let alone filled. They are much, much work but should reward me come summer. 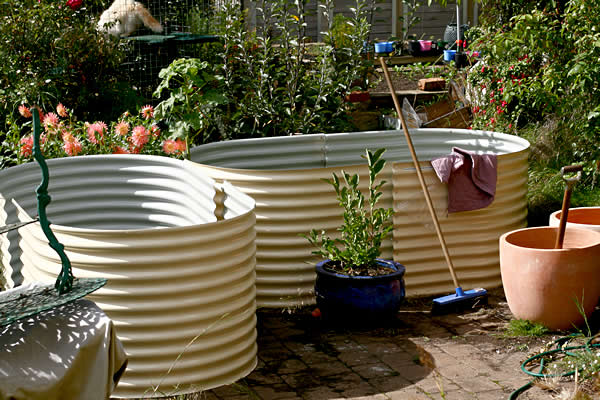 That’s it for now! The story continues here ….