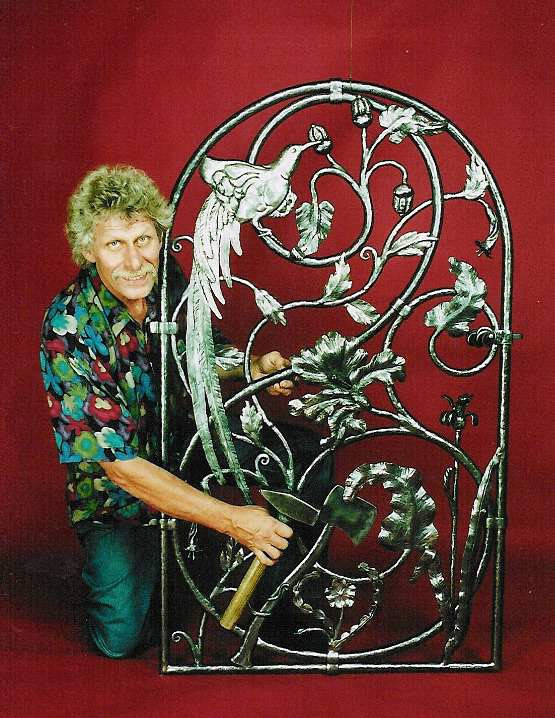 Over two years ago I was browsing the web looking for ideas for a gate for my just-about-to-be-built new front fence when I came across Roland C Greefkes‘ web site. I was so stunned at the beauty of what he created that I commissioned him to craft me an axe gate for Ashcotte. Two years later and it is almost here! (Still in Melbourne, but it has survived its customs and GST hurdles and will be arriving very, very shortly.) Below is a picture of Roland and the gate, taken, I think, before it was powder coated to a pewter-like finish (this may in fact be the pewter coated finish – right now I won’t know until I see it). The axe, because so much of my life and work has been influenced (positively!) by axes, the flowers because of my love of gardening, the bird of paradise which Roland put in because he thought it represented the creative spirit: thus the flowers feed off the axe, and the bird feeds of the flowers and is just about to take flight. I call it the Axe Gate, Roland refers to it as the Paradise Gate. It also has great significance as the magically-protective Flower Gate of The Troy Game.

To the left is a picture of the cat hinge, put in by Roland at the last moment to remember one of my cats who was recently run over and killed (and also to remember his old cat, who died the same week).

Editors note: Roland’s website is no longer active but here is the Wikipedia entry for Roland Greefkes and this interview/article called Ironsmith Follows Roundabout Path To Ancient Craft about Roland which appeared in the NY Times in 1989.