Editor’s Note: Sara lived and gardened at Ashcotte in Bendigo before she moved to Nonsuch in Tasmania in early 2005. We have added the pages from her time at Ashcotte which originally appeared on her personal website and her Victorian Flower Garden website.

I live in Bendigo in northern central Victoria in a small Victorian house called Ashcotte … which I adored the first time I saw it and which took me several years to persuade the then owners to sell to me.

I have lived in Bendigo since 1992, having previously lived in Adelaide, South Australia. The first house I lived in was … a trifle dilapidated, and most definitely a candidate for “This Old House”! But they never visited, so I was stuck with finding myself some new accomodation. Ashcotte found me first.

The most notable thing about Ashcotte it its ghost, Mrs Hannah Bloomfield (nee Wolstencroft). She built Ashcotte in 1892 (while still in the world of the living), and remains the soul of the house. She was a great influence behind the design (and approval) of the new front gate.

If Hannah tends to rule the roost inside, then at least I tend to have my way outside. The garden is my delight, and keeps me in flowers for the rooms inside.

My writing room is an office at the front of the house, overlooking the area of Bendigo known as Back Creek. The office has just undergone a year-long restoration. For relaxation, or when I need to just sit and think or plot out a new book I head down to the library, which used to be the old kitchen in the 1890s (this I restored in Victorian splendour about 2 years ago). It has a huge open fireplace which is perfect for thinking (the thinking aided as often as not with a shot or two of Lagavulan whisky, which just must be the smoothest, finest whisky ever made). Normally there are a couple of cats sprawled out before the fire … but as it isn’t lit in the picture you’ll just have to imagine them. 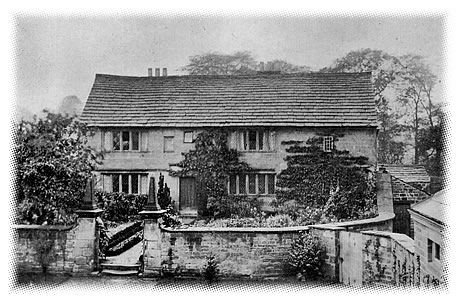 The photo to the right is of where my family lived during the seventeenth century: Low Hall in Kirby Overblow, England … no wonder I’m so dedicated to cottage gardening! Patently there was a gardener Sara all those centuries ago as well …

February 2005 update: As much as I have loved Ashcotte it just got a bit too small for all my books and cabinets, so I am about to move down to Tasmania.