The House at Nonsuch

Nonsuch is located in the Derwent Valley of the island of Tasmania in the Southern Ocean below Australia. Tasmania is a relatively large island with a population of about half a million, mostly centred in the major towns of Hobart and Launceston. It has a temperate (if windy!) climate, is heavily mountained and contains one of the world’s oldest and largest World Heritage Wilderness areas. The cool rainforest wilderness of Tasmania is beyond beautiful – if ever you get a chance to see it, then snatch at that chance – and it has heavily influenced areas of my garden. Tasmania was originally settled by Europeans in the early 1800s, and the main towns of the island remain predominantly Georgian and Victorian in their architecture and ‘feel’. I wanted to move to Tasmania for the climate, for its natural beauty, and for its heritage. I house-hunted through late 2004 into early 2005, and in February 2005 I discovered Nonsuch.

Described as a Gentleman’s Residence, Nonsuch was one of the very original houses in the Cornelian Bay and New Town area, which was itself the first suburb of Hobart, the capital city of Tasmania. Early paintings and photographs show the house (with its stables and outbuildings) surrounded by fields, orchards and market gardens with nothing but a toll house some distance away as the only companion building. These paintings and photographs demonstrate that, apart from a general inclination towards crumbling, the house has hardly changed over the past century and a half. The only real difference is that, probably early in the twentieth century, the old wooden shingle roof was covered with a tin roof (this tin roof itself was replaced within a year of moving into Nonsuch).

The ‘gentleman’s’ part of the house contains a large and impressive hallway, three bedrooms, a library, a front sitting room with a lovely bay window (now used as an office), a drawing room (which contains a cupboard with the house’s original wallpaper still inside it), and a bathroom, while the back servant’s part of the house contains a servant’s hallway (still with the brass servants bells hanging), a big kitchen, a scullery, a pantry, a laundry and a shower room and toilet.

Oh, the back servant’s hallway also contains the Hobbit’s Door, which is a full-sized door sitting six feet up in the wall leading … well, who knows where. It has been roughly plaster-boarded into a cupboard behind the doorway (oh so useful when the first shelf is more than six feet up!), but it is obvious it once led somewhere. That’s an adventure for another day.

In the grounds are three large sheds, one of which once held the outdoor toilet and bathroom. These are now used as garden and storage sheds. Under the house there is a massive area for storage. The house next door is actually Nonsuch’s old stable block, although now sadly much altered into modernity.

Pre-dating the house is the ancient hawthorn hedge that runs along the back of the property (within the neighbourhood this hedge is almost always referred to in reverential tones as the Historic Hawthorn Hedge). No one knows when that was first planted, as it was old when Nonsuch was built in the 1880s. Trust me when I say it is still vibrant – many are the afternoons I’ve spent pulling out vicious barbs from my fingers and scalp after tying to push my way through to hitherto undiscovered parts of Nonsuch gardens. The hedge runs along the entire back property line of Nonsuch, rising to about twelve feet high and about four thick.

Nonsuch sat on one of the major approach roads into Hobart, thus the toll house, and there would have been the constant traffic of carts carrying produce from the gardens and farms of the Cornelian Bay and New Town area into growing Hobart Town. The views from the house were, and are, magnificent. Nonsuch sits on the rise of Nanny Goat Hill overlooking Cornelian and New Town Bays, and facing north towards Mount Direction. Mount Wellington sits to the west of the house, the Derwent River to the right, and Queen’s Domain at its back. (Well, the Historic Hawthorn Hedge sits immediately to the back!)

There have been only four families living here since the house was built – and now me. The gardens have been decimated in size (but are still big) and have been ignored for at least half a century. There are parts of the garden it has taken me almost six months to hack my way through. It was only in September 2005 I managed to discover the far back corner of my property (terrifying a neighbour hanging out her washing, who declared she’d never seen anyone emerge from that thicket in twenty-five years).

One of the features of the house is its massive wrap around verandah commanding the glorious views. The verandah was in terrible shape when I moved in – almost utterly rotted away – but is now nearing a complete restoration.

Eventually, once I’ve had time to research the house and its inhabitants, I’ll be able to add to this page … but for now, the emphasis is on the garden. 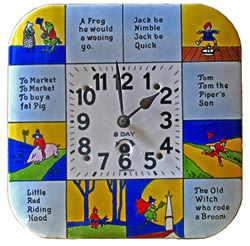 The old nursery clock that hangs in the kitchen of Nonsuch.