In order to grow well, you will need to know your kitchen garden climate intimately. This incorporates knowledge about when frost is likely to strike, where in your garden it will strike, and where the sun is at any given time of the day throughout the year, among other things.

But first – climate zones. I am not going to talk about climate zones. Frankly, I think they are fairly useless, and more than confusing. I don’t care what climate zone you are in. I have no idea what climate zone I am in. If I meet a fellow gardener I don’t need to know what zone they’re from (sometimes you see gardeners carefully feeling each other out in person or on internet forums by enquiring, with some reasonable degree of anxiety, about what zone they are from) although I do like to know what country someone is from, and what region within that country. I am assuming you are a fairly intelligent person and, should you gaze out upon deep snow and ice during winters that stretch for more than 6 months, are likely fairly capable of assuming banana trees might not do well in your garden.

You will know yourself if your winters are long and distressingly cold, encompassing snow and the occasional blizzard, or if they are mild and cool and grey and rainy, but not so cold. You know if your summers are long and hot and arid … or not. You know if you are living in the tropics or not. Given this, you should be able to have, at the very least, a broad idea of what you can grow. As you develop your gardening skills, and get to know your garden better, you may well be able to grow things that a technical climate zone classification might insist you cannot grow.

If you are very new to food gardening, and in any doubt about what you can grow, then pop into your local gardening centre and see what vegetable seedlings and seeds they sell, as this will give you an extremely good idea of what will grow in your area. Ask them for their fruit tree list. My local plant nursery will sell many stone fruit trees (which traditionally do well in a cool temperate climate like mine), for instance, but they won’t sell mango and banana trees. Do not pop into the local supermarket and assume that their ‘fresh’ fruit and vegetable section gives you an idea of what you can grow, because most supermarkets import food from thousands of miles away.

What I am saying, is that your own good commonsense will give you more information about what you can grow rather than some technical classification which can be misleading. As an example of misleading, I do know that I am only supposed to have 90 growing days where I live.

Balderdash. I am writing this page in the middle of my winter and I have a healthy vegetable garden outside happily growing away … when technically it shouldn’t be growing at all.

So, what do you need to know?

1. What areas of your garden get what sun, and when. In the first article I talked about starting your food garden in an area which gets at least 6 hours of sun a day. Unless you are living in the tropics, the sun will travel across your garden differently at different times of the year.

It is a really good idea to know where the winter sun strikes, and where the summer sun, because they can be very different. Trees and buildings will cast different shadows at different times of the year. You will need to know how the sun moves about your garden throughout the year.

There are parts of my garden I can’t plant in from late autumn through to mid-spring because they won’t get sufficient sun during that period. Alternatively, because I have so many deciduous trees, other parts of the garden become available for growing during winter because they will get the sun through the bare-limbed trees.

So get to know how the sun moves about your garden throughout the year. Only experience will tell you what you need to know – even your nearest neighbour might have a totally different experience to you because of a different layout of buildings and trees.

2. Know your garden’s vulnerability to frost (if your area doesn’t get frost then go get a cup of tea while I go through this bit).

Many gardens will suffer from frost, and you will need to know what months of the year you are likely to get frost, and what parts of the garden it will strike. While some vegetables don’t mind a bit of frost once they are established, frost is deadly to most seedlings, and can also kill many mature vegetables.

Generally speaking, frost settles down where it is trapped in low-lying areas by walls or vegetation. In Nonsuch’s kitchen garden four of my beds are vulnerable to frost in winter and spring, and three of those four are highly vulnerable. I know I can get frost from June through to late September.

This influences what I plant there, and when.

Other areas of the garden are protected from frost by buildings, walls, or sheer geographical height (my garden slopes from the back down to the front, so the back, where the garden is at its highest, does not get frost).

3. Know your garden’s vulnerability to wind. Many people don’t think about this, but wind has as much influence on your garden as does the sun and the frost.

My garden is exposed to terrible, hurricane force winds throughout spring, and at odd times throughout the rest of the year (Tasmania is the only landmass on the planet entirely within the famous Roaring Forties wind system). It has taken me years to come to terms with these winds, and to learn how to garden about them.

Not only do winds physically damage plants, they can whip moisture out of soil, too, so you need to be aware of them. If you have damaging winds regularly, then you may need to erect some form of wind break. A natural growing form of windbreak (like a hedge) is a great windbreak as it will allow some of the air movement through, but will break up the most damaging aspect of it.

Buildings can also form good windbreaks, and in fact I use my house as a gigantic windbreak and grow plants very vulnerable to wind (tall, fragile things like tomatoes) in its lee where they are protected.

Otherwise I stake like crazy, and many is the time I could be found out in gale-force winds in the middle of the night, my nightie flapping madly, desperately trying to restake some poor, young, vulnerable fruit tree. (In early 2008 I had hurricane force winds come through one night – shocking, terrible winds. The next morning I anxiously checked a line of trees I had only planted the week before. The winds had taken every single stake … but the trees were still there – albeit stripped of leaves.)

So get to know how the wind affects your garden. Be sure to check your soil after a windy day as even a gentle but consistent breeze can dry out the soil badly.

Know your garden’s vulnerability to wind.

4. Know your rainfall. Most people will need to water their kitchen gardens at some point, so this is the easiest of the climate factors to ameliorate (unless you are under severe water restrictions and don’t have a rainwater tank).

I obsessively keep rainfall records that stretch back years, but you don’t really need to do that. But do try to have a general knowledge of when you get the most rain throughout the year, or if you are likely to suffer deluges at any time of the year.

No gardener can have enough garden taps (or stand pipes). I’ve had an extra four garden taps installed during my time here and it still doesn’t seem enough. So if you are in the planning stages of your garden, make sure you have enough taps available, or have them installed before doing much work on establishing your garden. Work out how many taps you think you will need … then add two more.

I am not a fan of irrigation systems, or automatic watering systems, for the home garden. This is for two main reasons. First, every single type I’ve had (and I’ve had a few) tend to break down within a few years and then they’re nightmarishly expensive to fix or to replace. Secondly, no one ever really knows how their garden is going to evolve. Chances are astronomical that you’ll be replanning and reassessing and replanting things in different places with each successive year. If you have had an automatic system put in then the chances are also astronomical that it won’t suit your garden three years in.

5. Finally, know your micro-climate. Every garden has its own micro-climate that can vary significantly from what the overall climate for your area is supposed to be (another reason I have no patience for climate zones). When I lived in Bendigo, in Victoria, my garden was regularly six weeks behind everyone else’s garden in my area, and that was simply because of my own garden’s micro-climate.

Your individual garden’s micro-climate is going to be affected by all the factors above (sun, frost, wind), as well as by buildings and their placement, fences, large trees and shrubs, paths, ponds, what your land was used for previous to having the house or garden built upon it – a large variety of factors.

This is a knowledge that will also deepen as you live and work your own garden. You will find that some areas are good for certain food groups, others not so good. But only experience is going to teach you that.

So, when can we start to plant things? 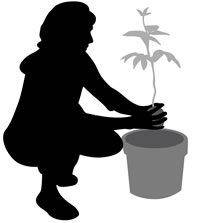