Chelsea’s Physic Garden in the mid-1800s

Note: What are here called the Botanical Garden at Chelsea is now known as the Chelsea Physic Garden 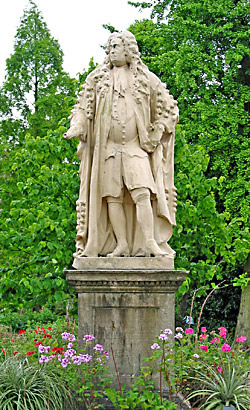 The Manor of Chelsea is a very ancient one, and has passed through illustrious and noble hands. Henry VIII, Catherine Parr, the Duke of Northumberland an Anne of Cleves have all owned or resided here. Sir Hans Sloane purchased the Manor of the last Viscount Newhaven in the year 1712. Sir Hans Sloane was one of those men who leave their mark on the age in which they flourish. He was descended from a Scotch family, but educated in the North of Ireland. he became an ardent botanist, of no mean ability; he studied the various branches of physic successfully; he was president of the Royal College of Physicians; and he was so great a benefactor of the botanical gardens at Chelsea that he greatly enriched them with scarce and curious plants

These gardens were the third of their kind in England. The celebrated John Gerarde, the father of English botany, established the first botanical gardens in the country. The gardens of Tradescant, at South Lambeth, were the next. He collected a number of rare and curious plants. But the whole were given, in 1667, to the University of Oxford.

The Botanical Gardens at Chelsea are nearly four acres in extent. Evelyn, that lover of trees and gardens, mentions them in high terms in his beautiful Diary. Various persons of ability managed them, until they fell under the care of Petiver; he accumulated so large a collection of specimens of plants, etc., that after his death Sr Hans Sloane purchased it, and it was sent to the British Museum.

It was at these gardens that he [Sloane] first studied his favourite science. A statue of him, by the celebrated Rysbrach, stands in the centre. Sir Hans Sloane was physician to Queen Anne, and in her last illness he was called in. He was also the intimate friend of Sir Isaac Newton. When Sloane purchased the Manor of Chelsea, he gave a large piece of ground to his favourite gardens, besides contributing in various ways to their embellishment.