Today a new (our only?) Farmer’s Market opened in the city so I popped along for a look. This was its very first day, so there were only about twenty stalls, but they were interesting, and I came home with some lovely local produce (old-ewe smoked sausage, special bacon, handmade soap). Lovely, but pricey. Hopefully the market will grow and have more variety and perhaps better prices. Its special point is that it is easy for me to get to, being right by where I get off Mr Bus in the city.

I took along my camera and got some snaps, but as it was a dull day, and I got mainly the backs of people peering into stalls, most of the snaps were dull and uninteresting. However, the very first one I took I forgot to adjust the exposure. Doh! I’d thought it was a write-off (amazingly I didn’t delete it on the spot), but when I got home I discovered that out of all of them, it had the most interest. 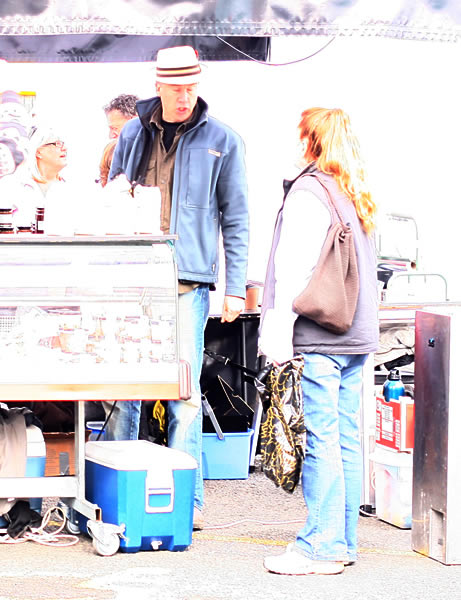 Otherwise I have spent the day tottering about the garden. Some pumpkins and zucchini seedlings (very large!) went out into the garden – I’ve had to put plastic ‘guards’ about them to stop the effing blackbirds covering them up with mulch (God, please,please come and take all blackbirds up to heaven!!!). I weeded one of the onion patches. I watered (my gardening life is now slowly starting to swing into a summer watering pattern). The potatoes and leeks are looking fantastic, everything else still too young. My ‘good’ batch of tomatoes continue to do brilliantly (although I see we are supposed to have a cold night tonight, I might pop them into the greenhouse just in case).

Oh, and I have started off the rhubarb champagne.

My Guinness casserole turned out foul. I say, young Jamie (Ministry of Food book), that was a bum recipe you put in there! I’ll have to cut the beer by about half to two thirds if I ever try this again. Better in the glass than in the casserole.

I am going to try elderflower champagne next. (My elder is almost flowering.) I was greatly amused by a recipe put up on the web by Mr Hugh F-W. When the recipe first went up, he overdid the sugar by about triple the amount. Consequently everyone who tried it had most of their bottles explode as the champagne fermented to profusion. The comments after the recipe are hilarious. Then Hugh corrected the recipe and everyone was truly pissed off as they hurried off to remake the champagne.

You can see the recipe and all the comments here.

Next post Preserves: Rhubarb Champagne & Vegetable Stock for the cupboard