The Year Anniversary (& some more gardening)

My sister Judy emailed the other day and remarked that it was about a year ago that I’d rung her in Adelaide and said, “I’m not feeling so good.” It takes a lot for me to ring my sister and say something like that – a year ago this month I was in actuality dying and just not realising it. I was in the midst of test after test after test, I couldn’t keep a thing down (the most I could eat in a 24 hour period was half a cheese sandwich and a few spoonfuls of canned peaches … and not all of that all at once), I was exhausted and yet I couldn’t sleep, and I was nearing total despair (do you have any idea what it is like of not getting any sleep for 6 weeks plus on end? I remember begging the doctor to give me something that could make me sleep, and when I finally got some tablets it was total heaven. I still only managed about 3 hours a night, but that much was wonderful). I had to cancel the mail and the newspaper because I simply didn’t have the strength to walk 20 paces down the front path to collect them. I was in so much discomfort. My life had ground to a close. I think my sister came close to panicking as I explained all this to her – bit by bit, and it was all I could do to stop her flying out immediately.

This is all so hard to recall. It was such a terrible, terrible time. I had no idea what was wrong and neither did the doctors.

*shudder* I can’t talk any more about it. More than anything I dread sliding down into that state again.

Not so much done in the garden today. I think I had done too much yesterday (not only had I done all that heavy gardening, but somehow, somewhere, I’d managed to walk 12 kilometers (about 7.5 miles) as well! I tried to go for a long walk this morning and felt very light-headed, so I came home and ate (love having an excuse to eat! After not being able to eat for months it is amazing to eat now).

But I have done some. I have weeded half the onion patch (I think half my life is spent weeding the onions) and have fertilized them with fish emulsion. Also fertilized the peach trees, the potatoes, leeks, garlic, and the peonies. I rehung one of the solar garden lights that had blown off in winter gales (these are lovely, great globes of warm honey right through the night). I cut off two branches off robinia trees that I had somehow missed during winter pruning. I fed the manferns their spring pick-me-up of brown sugar and watered it in.

Here’s a fairly bad photo of some of the manferns. They stand about seven feet tall, and they’re still carrying their leaves from last summer (usually they will die off over winter – this is the first winter they’ve survived through). In about 2 months they will be crowned with huge branches of new leaves. 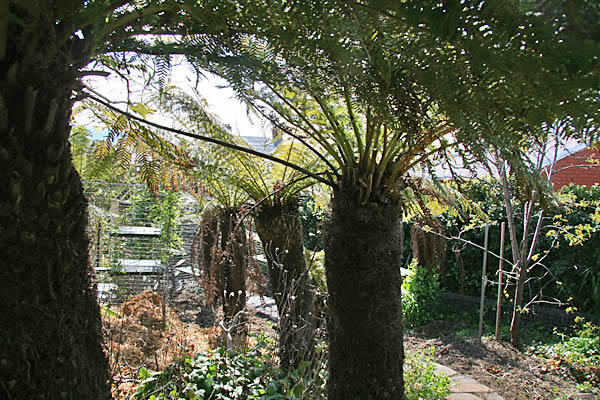 I also pruned back the massive climbing rose that covers the sky between my house and the potting sheds – I need to clear out head room about 3 times a year.

And I made a start on the woodland paths. The woodland has been sadly neglected for over 18 months and in this time the mulch and dirt and debris has spread right over the paths, so have made a decent start of clearing them off.

Later: And planted about 30 pots of Blue Mini Popcorn for transplant later into garden, popped into greenhouse which is now getting a little crowded.