Finally I have my copper preserving pan. It arrived from England yesterday and it is precisely what I needed. It has spent the last 80 odd years in someone’s attic, and it was covered with dirt and grime and tarnish, but I have just given it a scrub and got the worse of it off. I still need to polish it back to a high finish.

This will be the jam and jelly pot as it can cook at very high temperatures. 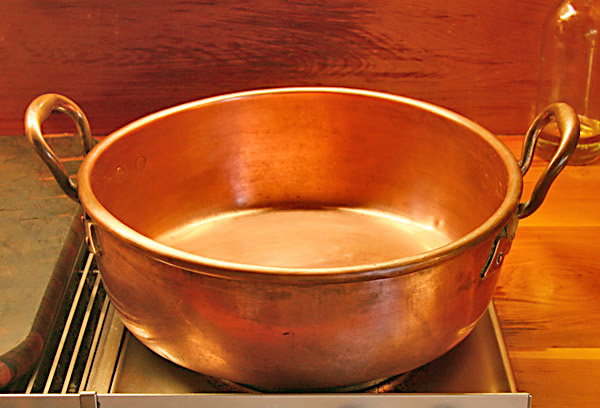 It is light, it has the right ratio of height to diameter, and apart from one slight ding it is as in new condition – and it cost half of what a new one would cost, plus it looks nicer. It holds eight litres (eight quarts) which is enough for what I need to do.

Garden is going along well (although the parcel postie who dropped off the pan spent a good ten minutes telling me I had to watch out for snakes). All the tomatoes are doing fine save for that very first lot I seeded up – my second lot of seedlings are doing fine, as are the adopted tomatoes. So maybe it was just too cold for the first lot. Who knows. Everything else is popping up and growing on well, although I won’t be planting out into the beds for likely another month, maybe three weeks if I think they are strong enough.

I made myself some lovely beetroot mash the other day. I boiled a beet until it was very soft, along with some sweet potato, then I mashed them with butter and salt and pepper and some garlic. Yum! Apparently this is even nicer when the vegetables are roasted rather than boiled, and mashed with cream rather than with butter – I still have to give this a go. Today I am going to make a cauliflower sauce for my veggies – will let you know how that goes.

Next post More Copper, Fairies and a Job Finally Done.