First, the rose has been cleaned up and taken away by trusty Tony – here is a pic taken this morning. Today has exceedingly bright sunshine, like you so often get after a storm – and because I metered this photo for the shade so you can see the rose, the side of the house in the sun has some interesting light effects. 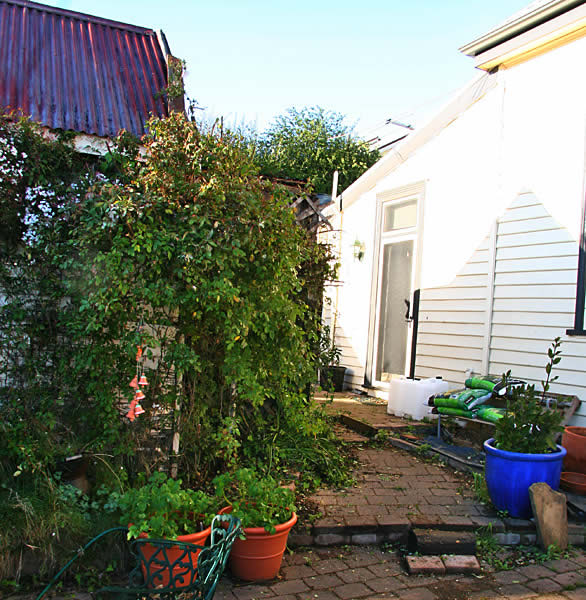 As you can see a surprising amount actually remains, and the central trunk of the rose is about well over five feet, so it will sprout back and regrow within a couple of years. Previously the rose has been twice as high as the potting shed’s red roof (it really was enormous) and completely covered the space between the potting shed and the house – it was a lovely arch to walk under. One of the bird’s nests has survived too, but the birds have abandoned it, having concluded their real estate’s enthusiasms about “Location! Location! Location!’ were entirely unfounded, and forgot completely to mention the possibility of catastrophic collapse.

The two pots of potatoes survived, too!! Hardy things they are. They’re a bit battered but will recover nicely.

OK, so what happened. The weekend storm was highly unusual for Tasmania in that, while we often get gale-force winds, they usually come from the north veering to the west. On the weekend the gale winds were from the south. So the state has lost many structures and trees that, like my climbing rose, had grow and strengthened to resist north and westerly winds, but which were vulnerable to winds from the south.

So, early on Sunday morning I was taking advantage of a break in the weather (not yet realising we’d even had a big storm through the night!) and was weeding out the leek patch when suddenly I’d heard an almighty crash. I stopped for a bit, couldn’t see anything and then, being the uncurious person I was went back to weeding. I finished the job, saw police on the road outside my house, and assumed that there had been a crash on the wet roads and the police were directing traffic around it. Not wanting to rubber neck I’d just come inside and put Sunday morning’s entry up while I had a morning cup of coffee.

Then suddenly, all power went. It happens occasionally here, so thought that it would be back on in an hour or so, and so then, and only then, did I think to wander outside to ask the pretty police lady by my back gate what was going on. (By this time there were lots of council trucks in the area too, and I didn’t know why they’d be there for a car crash.) The instant the policewoman saw me approaching she hurried over with shooing motions to make me go back inside. I stood my ground (by now thoroughly curious about what was happening) and asked the obvious, “What’s going on?”

Apparently, in the street just around the corner (I am one house down from a corner house fronting two streets) a gigantic sugar gum had come down (that had been the bang I’d hear earlier). It had taken out several fences, a few cars, and had snagged every power in Tasmania (so it seemed to me! LOL) and brought those down as well. There were live power lines everywhere snapping and sparking and jumping and everyone was trapped in their homes.

Now, remember there had been this terrific storm, from the south, and something like 300 (at least) trees had come down in 300 different locations and brought down lines, plus all the usual power disruptions and outages. The emergency line to the power company was overwhelmed with about 30,000 calls all at the same time … and no one could get through to report that this particular emergency had happened – so the police had cordoned off the area and everyone was stuck in their homes. I’d actually kept power until someone had finally got through and the power company had responded by shutting off power to the local neighbourhood to make the lines safe.

So this was just the start of the drama.

Before I get on to the rest of it, here is a pic of a young sugar gum and a house, so you can see how big they are:

Now, that’s only a young sugar gum; the one that had come down near me had been about twice the size. They are pretty pretty trees but they should never be planted near homes as they are deadly – they drop branches all the time and they can do a devastating suicide plunge without warning. My house in Bendigo had one outside on the footpath that was massive – the council refused to remove it (I saw it drop a massive branch once that narrowly missed a woman with a pram walking under it) and I have to say I was never so glad as when that house sold because I was sure it was going to come down on my roof one day. In Israel where they had been planted extensively after the war they are now known as widowmakers for their killing ability. Now they’re never planted in urban areas, but what can you do about the ones planted a hundred years ago – often local councils label them ‘heritage trees’ and refuse to remove them (which is what Bendigo Council did to me). In Australia at least once a year someone is killed when they decide to go camping in the bush and pitch a tent or park a car under one. They are renowned for suddenly dropping a several ton branch just for the sheer heck of it, and often on absolutely windless conditions. So that’s the end of my rant about sugar gums in urban environments.

OK, so that was the start of the drama. Essentially then, and to put it briefly, I was without power for about 36 hours. The power company had so many jobs that everything had to be queued and everyone had to wait for a bit. That’s OK. All understandable. What I was a bit pissed off about was that the power company’s total lack of communication to the public. No one knew what was going on and the single phone number was so overwhelmed that for almost 15 hours I couldn’t get through. Neither myself nor my neighbours had any idea of what was happening, or even if this fault had been logged yet – the power had been switched off, but had the power company actually logged the fault and put it in the queue?? When I finally got through (at 3 am on Monday morning, after 15 hours!) they said they didn’t know about it! Argh! There was nothing in the local newspaper save the broadest of coverages of the storm, there was nothing on the local radio. The power company simply has no procedure in place to keep the public informed of what is happening … and it isn’t like we don’t get lots of storms! So that has me irritated.

But I haven’t got to the best bit yet. I guess most of my readers don’t know my precise location so as long as I don’t use names I guess I will be OK legally. As I said, my house is one down from a corner house. Let’s say this corner house is inhabited by neighbour X. Neighbour X has 2 street frontages, one he shares with me (his back fence), and on the street that was directly affected by the downed power lines (his front fence), he has Neighbour B, with whom he shares a side fence (I also share my back fence with Neighbour B). I hope I haven’t confused anyone with all the fences. LOL (Diagram below.)

Anyway, no one on the street with the powerlines down (the street on which Neighbours X and B have their front fences and driveway gates) could get out for hours and hours because of the live wires jumping about all over the place. Neighbour B, for whatever reason, decided they simply HAD to get their car out, it was IMPERATIVE they get their car out, NOTHING was going to be allowed to stand (literally) in the way of their mission to get their car out … and so they decided to demolish the side fence between them and Neighbour X and drive bumpity bump through his garden, hopefully avoiding the rabbit hutch and pet dogs and a pretty boggy but otherwise immaculate lawn along their bumpity bump way and then straight out his other side fence to the street which didn’t have power lines down on it! LOL (I’m pretty grateful they didn’t decide to go through me instead.) 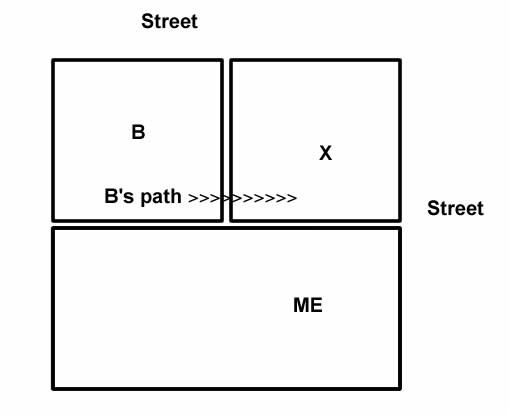 Now, not many people would have thought of that (or even dared think about doing it) but it hadn’t stopped Neighbour B who, when stopped having demolished the first side fence in their path and was on their bumpity bump way through Neighbour X’s back garden, claimed some ancient right of way. LOL Tempers were fairly hot there for a while, and I guess relations have soured completely between Neighbour’s X and B (having been touchy for some time anyway).

So basically I was out of power for a day and a half, I managed fine, but was bored witless. All I really could do was read (the weather was too bad to think about gardening or going out) and so for about 36 hours I read the recent biography of the Queen Mum (which is where she comes into it). Basically now you can say I am pretty much over the queen Mum.

Even my phone lines were down (even for the old dial phones, which I still have tucked away), and my mobile was rapidly running out of power (after a fair few calls asking “Do you know what’s going on?” “Nope, no idea, mate!”).

I simply don’t need any more excitement this week!

Oh, one thing I have to do. Over the years all my phone numbers have gone onto my computer’s address book. I didn’t have them in hard copy. This was a big problem when I had no power! So the first thing I did yesterday when the shops opened was to go out and buy myself an address book, and this week I will be recording down all my phone numbers and addresses in my book.

Previous post The Aftermath of the Storm - Not Fun! Waaaaaaaah!