I am still madly, deeply in love with my new copper preserving pan (see previous post). I have to include yet another shot of it – but this time its rivets, which are so beautiful. 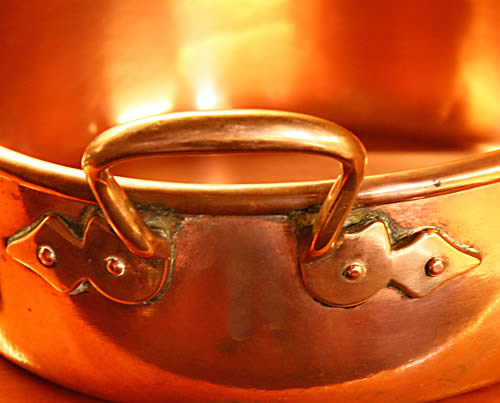 Brin – I likely won’t be using it until the autumn fruit harvest is in – about 6 months.

Also, still on copper, here is a lovely 18th or 19th century gallon ale jug from a tavern which I bought from ebay recently. I just love copper! 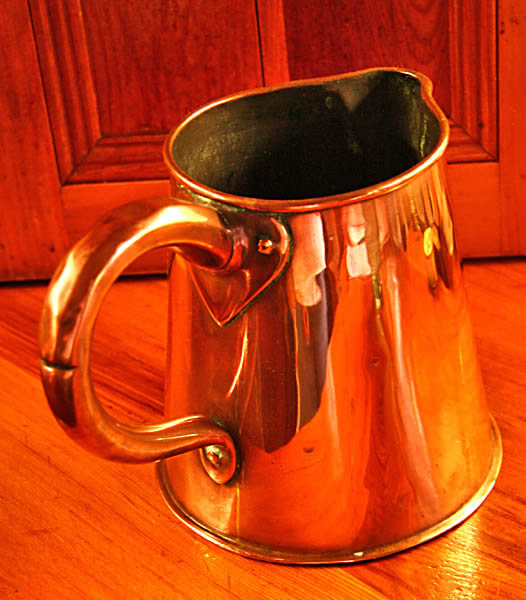 One of the things I will be having in the new kitchen is a hanging pot rack, and much of my copper collection will hang from there.

Tip for buying antique copper from ebay – go for the pieces that still have a century of grime on them – you can buy them at up to 80% off and everyone else madly bids on the pretty bright piece that is exactly the same. That ale jug, for example, I bought for £12 in its grimy state while an exact duplicate (but polished) is currently the centre of a bidding war which, last time I looked, was at £88. It takes but half an hour to clean them and then just the occasional buff to keep them bright.

In the garden today … I have FINALLY finished filling the sixth raised bed! I am so excited! It was a bitch to fill as, while I could get the wheelbarrow in close, it meant manhandling the thing around three tight, narrow 90 degree turns and it was, truly, truly awful (my stomach muscles, still not completely healed from surgery, are extremely sore today). I cheated the littlest bit by putting on thick layer of straw (which meant 3 less wheelbarrow loads), and I expect the level will sink slightly … but for the moment I can relax.

Here it is, leeks and potatoes in the foreground, pots of garlic to the left. (Many of the leeks are in little sleeves of old cardboard toilet rolls, meant to keep them white.) 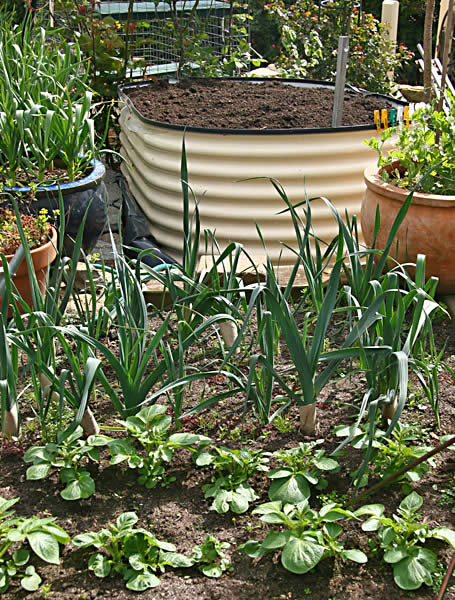 There is a seventh to fill, but for the moment I am relaxing. That one isn’t urgent, and I won’t even fuss too much if I don’t get it done this growing season. Six has been enough.

Every time I dig in the main garden and I find worms, I gather them up and pop them into the raised beds! All 6 now should have colonies of worms established in them.

And look, I have a fairy among the King Edwards! 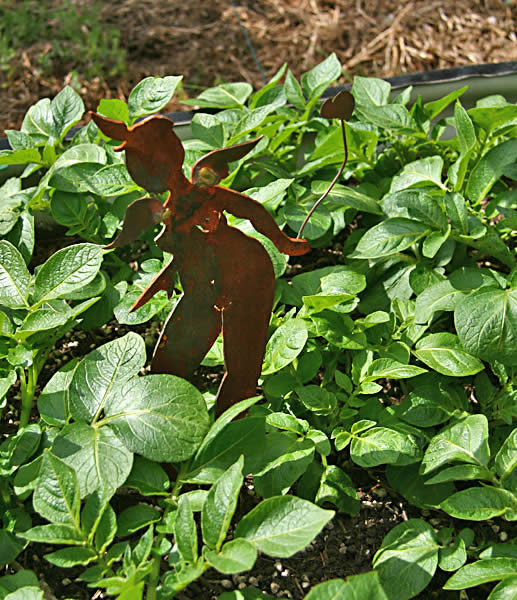 Today has been a good day. Not only have I filled the sixth and most awkward bed, I have completed lots of minor tasks about the garden, including risking life and skin to tie together two curving branches of climbing roses to meet over a sunken path – over the next year or so these will establish as a wonderful rose arch.

Life is always good when I have a good day in the garden.