Some Winter Photographs of the Bog Garden

Although it is still winter, spring is on its way. We’re way past the midwinter solstice, and two nights ago I was struck by a beam of bright light from the kitchen window as I was cutting up vegetables for tea. During summer the light always shines in very strongly through the kitchen window during the late afternoon, but not during winter. But now it is back. And yesterday – strong gusty winds – which we always get during spring from the Roaring Forties.

So spring is on its way. I am half excited at the thought, half horrified as I contemplate all the work yet to do.

But to the photographs of the Bog Garden. I went out at sunrise this morning – low light is the best time to take photos here as otherwise everything is lost in the blaze of sun.

Please click on the photos for larger more detailed versions.

One: I am standing about halfway into the bog garden looking east – as you can see from the glorious sunrise. The path is a mess, but that’s OK, I can clean that up at my leisure. The ground is boggy to either side of the path which is raised and drained. The arum patch is glorious! I love arums, they are one of my favourite flowers. Just in the top right you can see the branches of a totally gigantic maple tree which marks the divide between the bog garden and the food garden. All the dead stalks are from Russell Lupins (also a favourite) and from various iris. At the back is a pittosporum hedge to hide the less-than-appealing next door garden (concrete and purple walls), fronted by a line of mop-top robinias – in summer hedge and robinias shade the garden and pathway. By summer this view will be a blaze of green and colour. Don’t forget to click on the photos for a better view. 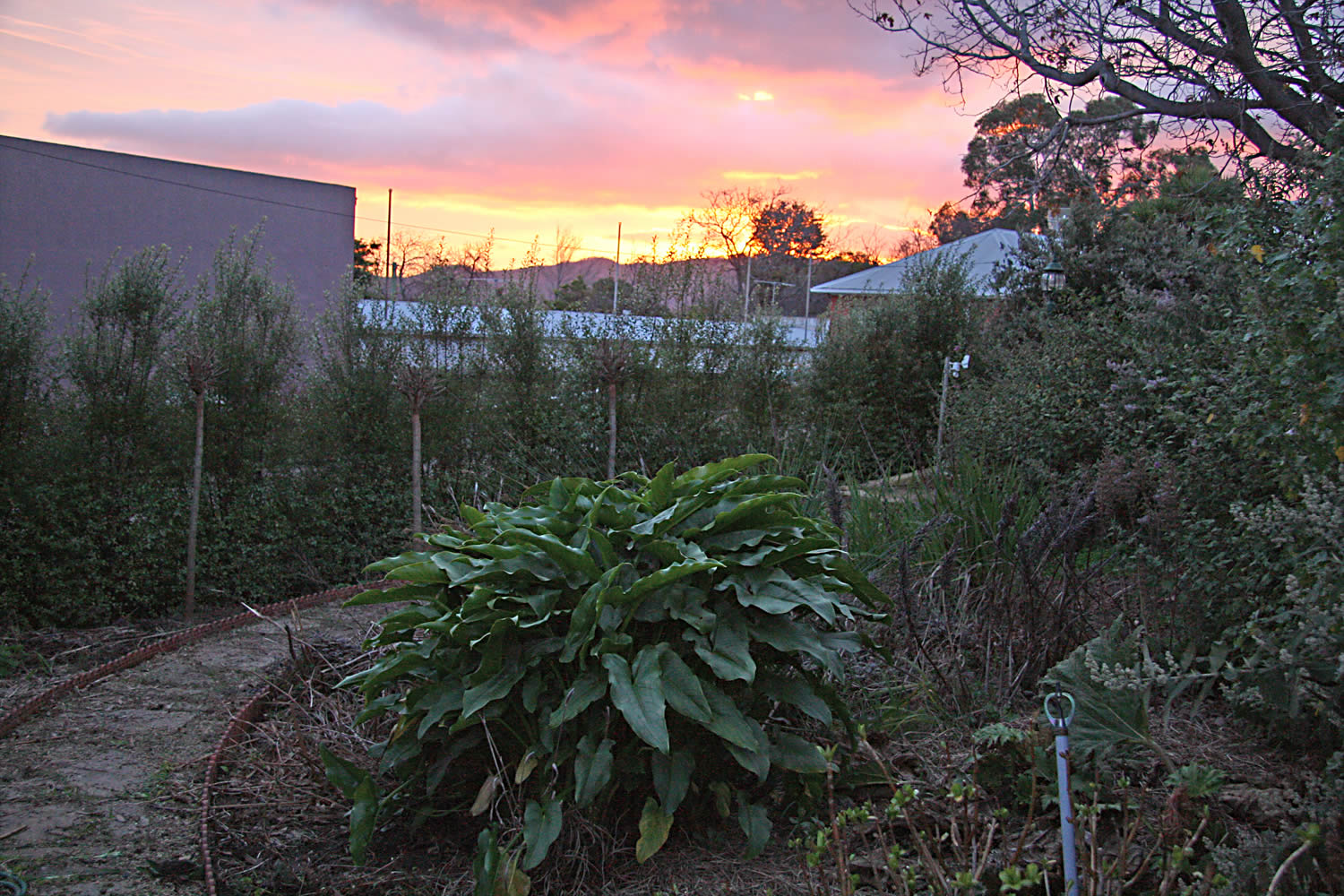 Two: Here is the patch of Louisiana Iris I planted yesterday. Behind it are two Gunnera. Oh man, I love these plants. Also known as Giant Rhubarb (although they have no close relationship to rhubarb, and you certainly cannot eat them) they grow to huge proportions – the leaves can be six feet across. They die back in winter and sprout anew in spring. They have huge spikes of scarlet flowers. They love to have wet feet, so do well in bogs. Just in the curve of the line of iris you might be able to see one of the dragon arum poking up – it is centre, about a third of the way up the photo. 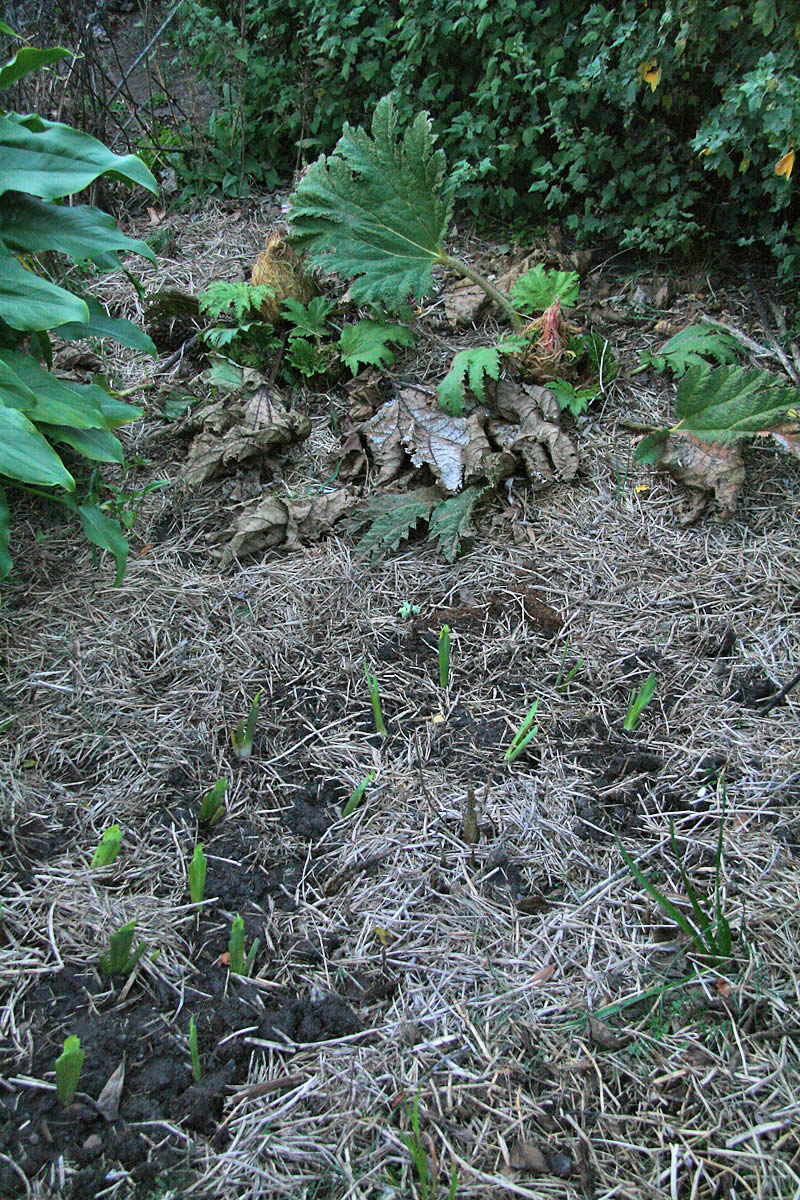 Three: A closeup of one of the Gunnera. You can see its heart, all furry and fluffy and just waiting for spring, also several new leaves starting from its base. That heart is about 2 feet tall, to give some idea of size. 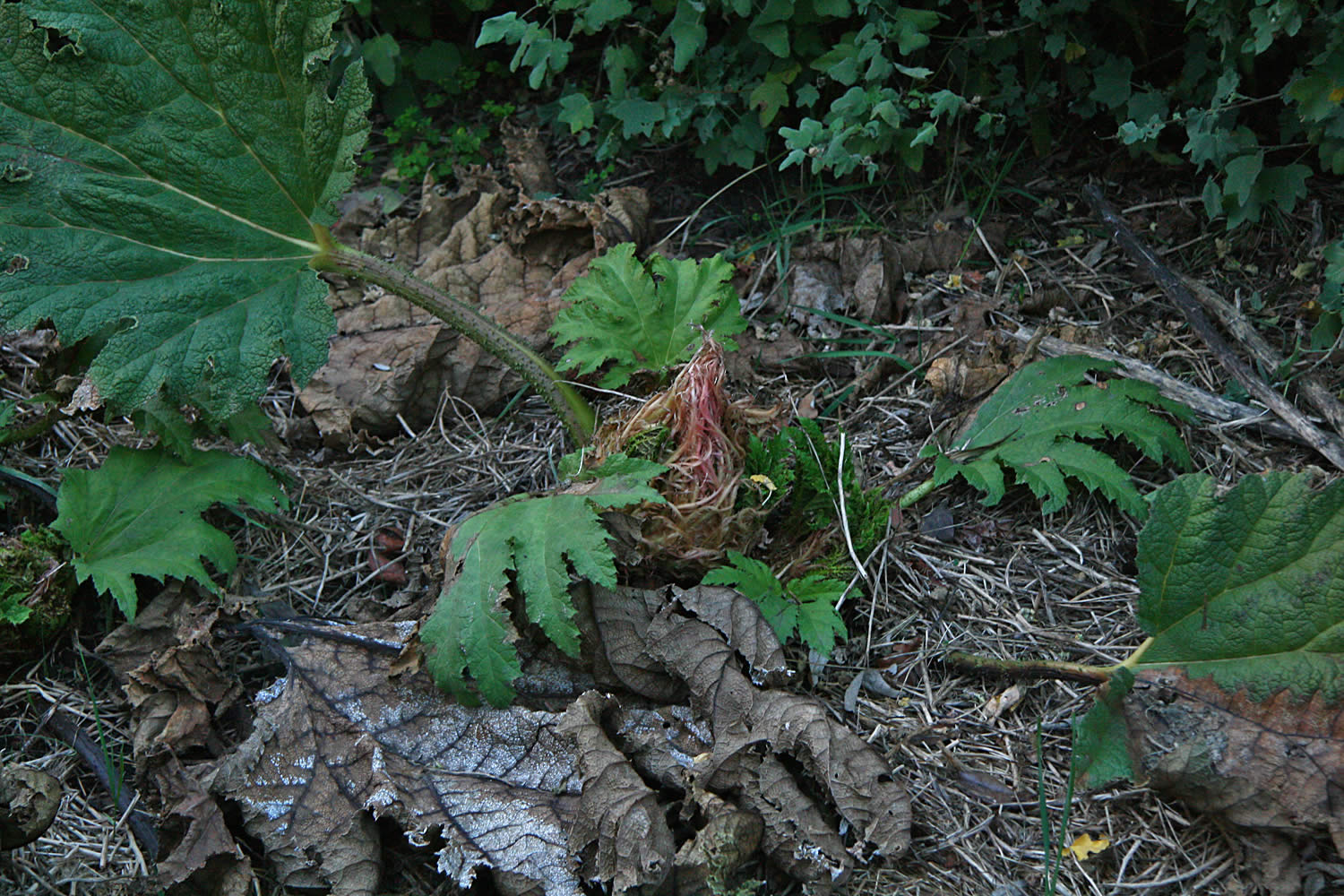 Four: OK, looking back the other way – west. Again the patch of arum stands out, as does all the twisted leaves and stems of last year’s iris and russel lupins. I never make too much effort to clean these out – I like the lupins to self seed, and I quite like the silvery mess of the dead leaves. By summer the new growth will have totally obscured them. On the left of the photo you can see part of a line of shrubs that cuts off the house from the front bog garden. This bog garden is a secret garden, entirely enclosed in hedges, and you have to walk all the way through to see it. I like secret gardens.

Top right is the stump of an old tree covered entirely with ‘war-bride’ geranium – the war-bride wife of a former inhabitant came out from England in 1946 with pots of geraniums carefully nurtured on deck – this is one of them. The spiky green leaves on the left are (I hope) Watsonia. I say I hope because they may be Montbretia, which is a weed in this garden. 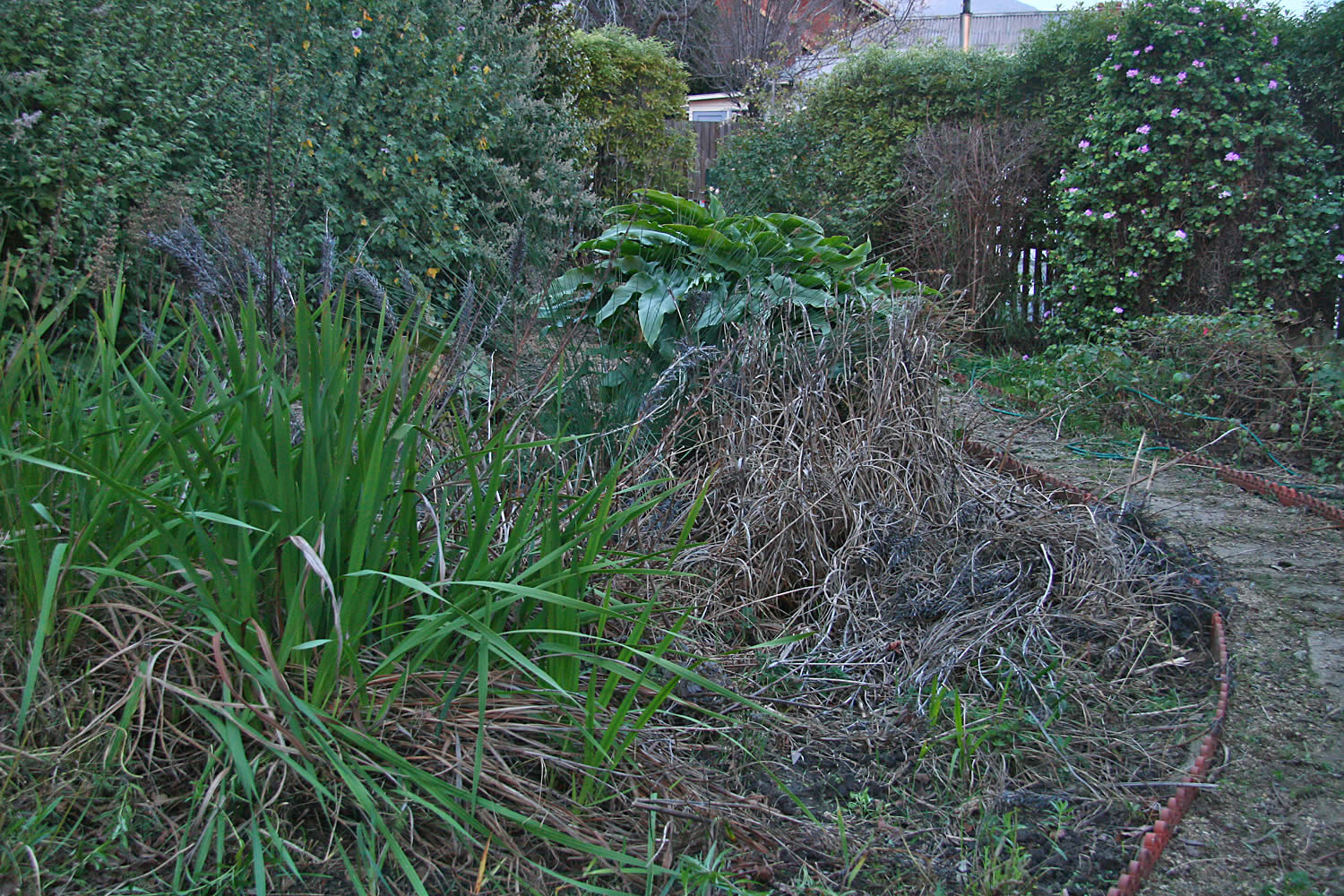 Five: a look to the other side of the path, sloping down to the front fence. There is another gunnera in there, as well hydrangea, and lots of wall flowers. Also a patch of comfrey and some oyster plants. Most of it, though, is currently sitting under ground waiting for spring. The trees on the extreme right are the mop-top robinias, pruned back to their hearts. 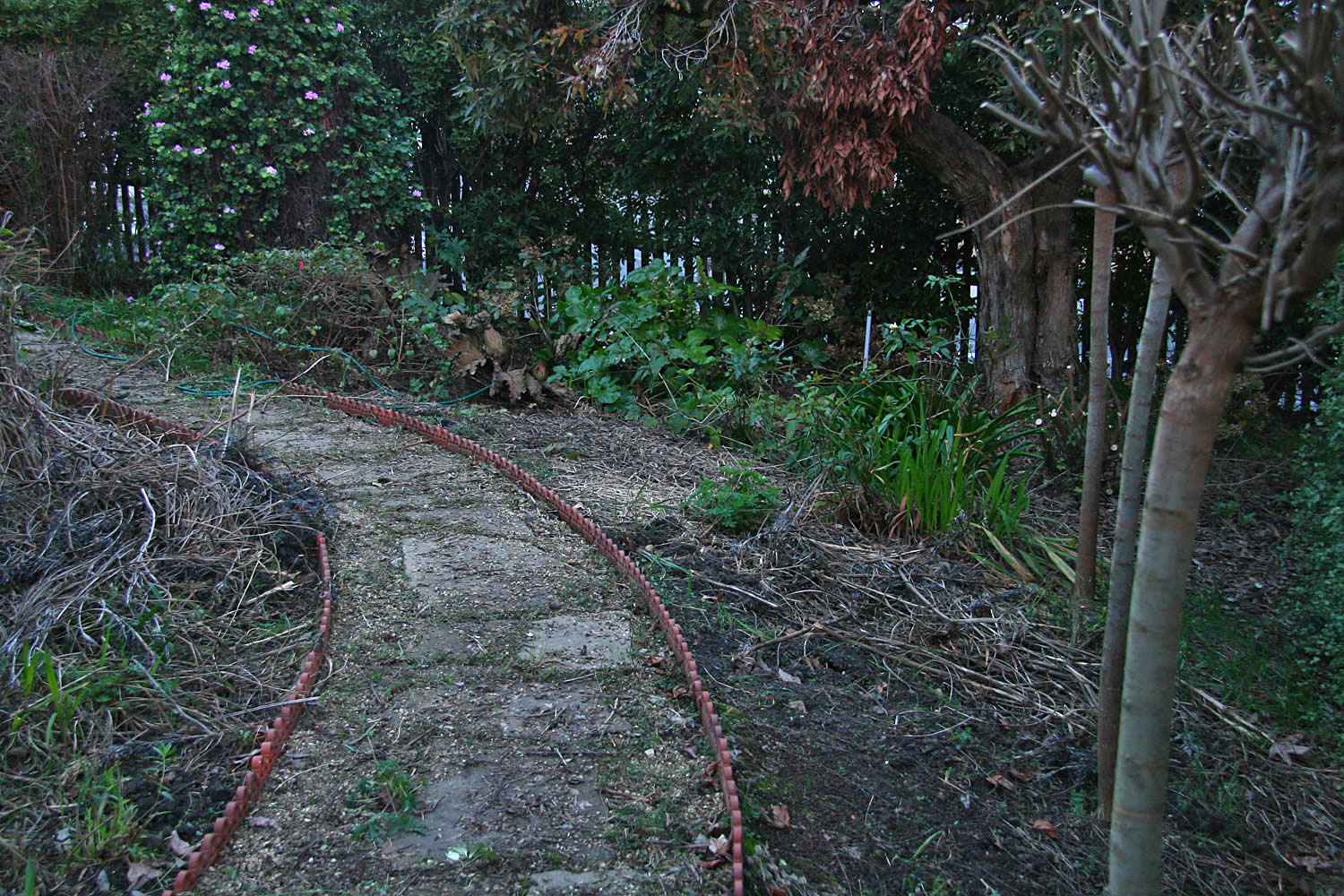 Six: finally, a look southward – the steps leading up to the food garden. 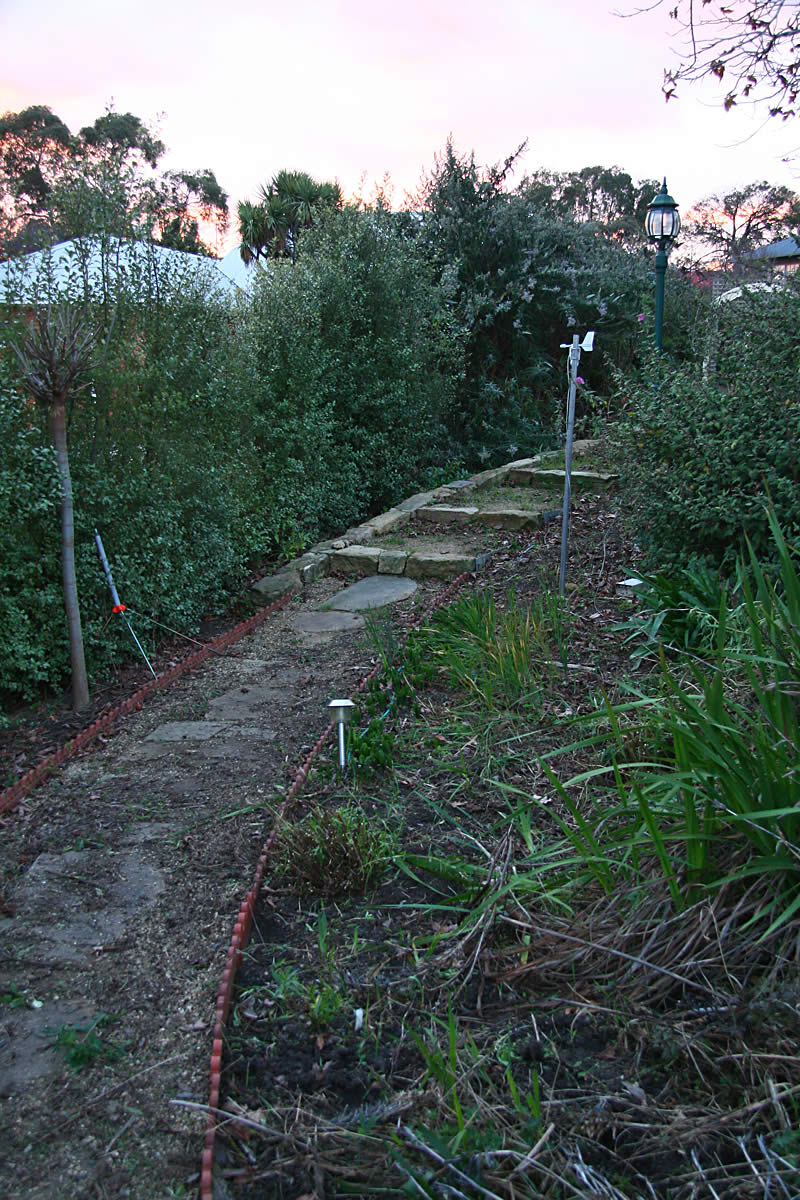 There ya go! A trip through the bog garden! Come summer I will post another series so you can see just how much it changes.