1) Pork is a total shit to grind. Next time just get the pork mince at a $1 extra a kilo.

2) Learn to use that odd bit of contraption that came with the funnel attachment and which you thought was a redundant bit of nonsense. If you don’t use it nothing will work.

3) Stop underestimating how many sausages (and thus casing) 2 kilo of mixture will make. I had to add three more lots of casing which only made it more difficult as I had to stop and start, stop and start in order to add more casing to the funnel .

4) Leave more unused casing at the ends to tie off.

5) Next time don’t forget the extra breadcrumbs to push the final bit of mixture through the grinding works and funnel because otherwise it is a total nightmare to clean afterward.

But apart from all that … it was surprisingly easy. I think you just need to do it once to get the hang of it.

I fried up the bit of mix left over to see what it tasted like … good, but maybe more spice next time. But then I do need to leave the sausages in the fridge overnight for the spices and herbs to season properly.

I got bits of mince all over the kitchen!

I am going to have seasoned pork sausages for breakfast tomorrow.

Here is a photo of the linked snags. Not pretty or even, but my first sausages! 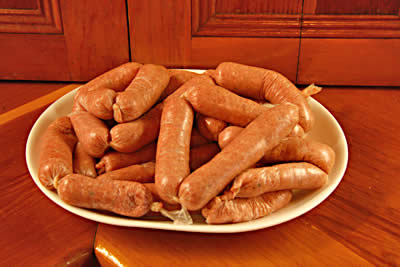 Later – forgot to add the recipe, which would help.

I had roughly 2 kilo of pork mince. To this I added an extra 200 gram of breadcrumbs (reason given in a tic), plus about 20 gram of the seasoning mix which was the pork rub I mentioned in the previous entry. I also added about 100 ml of water … I am not sure why you add water but the book I was following insisted on it (I am not sure you really truly need it). The breadcrumbs are there to add bulk and also to soak up fats and seasonings once the sausage starts cooking. You can probably add quite a bit more than the 200 gram – it will bring down the cost of the sausages and lessen fat content. You can use cooked rice if you don’t want gluten … but I haven’t tried this yet in my total experience of one lot of sausage making.

The French recipes I have don’t use any rusk or breadcrumbs at all, so it will be interesting to try those. You just mix it all together with your hands, then push it through grinder and funnel into the casings. If you have lots of air pockets in the sausage you need to prick the casings to remove the air.

When I was a small wee girl we were always taught to prick our sausages before frying. Apparently this was because in World War II and the decade after, meat was in short supply so lots of water was added to the snags. This meant that when they were being cooked the water turned to steam and the snags exploded if you didn’t prick them. Now few people need to prick because of the lower water content.